Emma V. Leech’s TO WINTER AT WILDSYDE – Brilliant Writing and a Good Story but Choppy with Other Women’s Stories Interjected 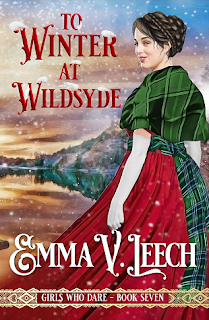 Set in the Highlands in 1814, this is the story of Miss Ruth Stone, a wealthy heiress whose father wants her to gain a title through marriage. Apparently, she is a part of a group of London women (“Girls who dare”) each of whom agrees to a dare. So Ruth agrees to say something outrageous to a handsome man, which she does when she proposes marriage to the heir to an earldom, a wild Scot who needs her money.

Gordy has a lot of emotional baggage having been declared the bastard heir and his family having deserted him. He doesn’t trust Ruth to stay. In fact, he plans to send her away the minute she is with child. It’s a marriage of convenience and Ruth’s son(s) will inherit title but she won’t be living at Wildsyde for very long if he has his way. Why risk his heart with a woman who will only leave him?

It’s a great setup and I was reading along, enjoying the story, the dialog and the details immensely when about 40% of the way through I’m suddenly thrust into a scene in London with another of Ruth’s friends who I don’t know. Apparently, out of poverty, this woman agrees to a scandalous arrangement. I assume this is a setup for a subsequent story, but still—what happened to my Scottish story??

The conclusion I reached is that this author is a great writer and the series very clever, but don’t read them out of order or, like me, you will be lost. This is not a stand-alone. Also, I’m not sure I like being jerked out of one story into another that is related only by “dares”. I couldn’t help but wonder if there wasn’t enough of a story between Ruth and Gordy so that filler letters and scenes had to be added.