Sharon & Tom Curtis (aka Laura London) - THE WINDFLOWER – Superb Pirate Romance set in the War of 1812! 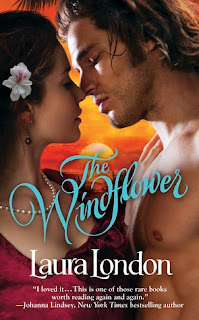 One of my all-time favorite books and a classic, The Windflower was the product of the husband-wife writing team of Sharon and Tom Curtis and some believe it was their best. I can tell you this: this pirate romance set in in 1813 during the War of 1812 is one of the finest historical romances I have read. Originally published in 1984, it was reissued in 1995, and can be obtained on Amazon for Kindle. It’s a keeper among keepers.

It tells the story of innocent, sheltered Merry Wilding, an American living in Virginia with her maiden aunt. Merry has a talent for drawing faces from memory, a talent her brother, an American spy will use to his benefit, exposing her to pirates and worse. Then, on her way to England with her aunt who wants Merry to have a better future, she is kidnapped. Taken to a pirate ship, she meets the English pirate Devon, who remembers her from a night long ago where he encountered her in a tavern. He holds her captive, believing she is involved with his enemy who was also on the ship Merry was sailing on. Protecting her brother, she will not reveal who she is. Devon is intelligent, beguiling and smooth and innocent Merry is powerless to turn away his kisses. The whole crew of pirates comes to love Merry and to teach her many things as she blossoms from shy girl to strong woman.

The writing is superb, the characters courageous, heartwarming and very special; the descriptions of the environs vivid; the metaphors numerous and well done; and the story a wonder to read, and re-read. The plot is intriguing. You will be swept away on a pirate ship to experience many adventures, battles at sea, storms, death, outrageous humor and love. I thought the writing gifted.

Here’s a sample from one scene; I bet it moves you though not a word is spoken:

“His fingers whispered over her face, seeking and slowly stroking nerve points, knowing where, how long, how much to caress. Her skin gained color under his touch; her eyes became enormous; her throat tightened. By her nose his little finger encountered a forgotten tear. Gathering the sparkling drop, he smeared it slowly over the curve of her lips and blew it gently dry. One hand came lightly to rest on her neck; the other supported her cheek as he sought her with his kiss.”

“Tragedy dwelt like a blue flame in her big eyes; the shallow pulsebeat in the golden hollow of her throat was luffing like a spanker on a vessel that was hauled too close to the wind. He had seen the look before on women about to be raped, and he found no charm in having it turned on him.”

If you love pirate romance—or even Regency period romance set mostly outside of England—this classic will not disappoint.