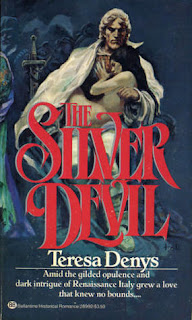 Silver Devil was my first by Denys and I quickly gobbled up her only other novel, The Flesh And The Devil, which is also wonderful. Both are set in 17th century Europe. Both are classics worthy of reading today.

The Silver Devil begins in 1605 north of Naples, Italy, at the time of the plague. It tells the story of Felicia Guardi, a commoner beauty who comes to the attention of Domenico della Raffaelle, the new Duke of Cabria, the one they call the “Silver Devil.”

When her mother died, Felicia learned from her brother that she was bastard born. Forced by him and his wife to live in their house as a servant, Felicia becomes a sort of Cinderella. Though Felicia has had a hard life, she has virtue, integrity and wisdom that outshine all those around her. Surely that is what Domenico saw when he chanced to glimpse her. Without her knowing it, Domenico buys Felicia from her half brother who drugs her so she can be taken to the duke’s palace.

Already ruined by having been taken to the duke, Felicia nevertheless fights the man who would have her (“a demon’s eyes in the face of a fallen angel”… “as graceful as a leopard and as treacherous as murder”). After he takes her maidenhead, she realizes she has no choice but to stay with him until he tires of her, which according to what she is told, may be very soon as he runs through mistresses quickly. But Felicia is unlike any woman Domenico has ever known and he does not cast her off.

Having just come to power, Domenico is aware of the seething treachery swirling around him. There are those who would prefer to see his half brother Alessandro rule the duchy. And Domenico knows he must take a wife and sire an heir so there are choices to be made. But Felicia has fallen in love with him (“…it was then, as I went to him like a falcon flying to his fist, that I realized I loved him”); and even knowing she will be set aside, she stays.

I can’t say enough good about this classic. Brilliantly written with attention to detail reflecting much research into the era and the politics of the time, it is a fascinating story of warring families and the vicious actions some take to stay in power. The prose is nearly lyrical at times and Denys’ writing is truly beautiful in its descriptions. Few authors could do it so well.

The plot is intricate and captured me from the start. Though told from the first person (we are only ever in Felicia’s head), it works for an intriguing story as we can only wonder what the Silver Devil is thinking behind his black eyes. Felicia is a wonderful heroine, and though he was often wicked, Domenico was a very worthy alpha male hero. I did not want to put it down. It's a keeper.