Jan Cox Speas’s MY LORD MONLEIGH – A Beautifully Written, Poignant Love Story From the Scottish Highlands in the late 17th Century… A Keeper! 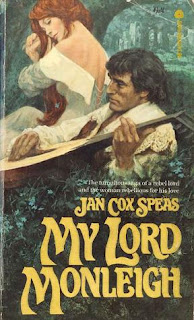 This wonderful story is set in the Scottish Highlands in the late 17th century (mostly on the west coast) during the time when the Scots fell under Cromwell’s cruel hand and King Charles II lived in exile in France. The Catholic Royalists, such as our hero, Lord Monleigh, faced opposition from both the English and the Covenanters (Scottish Presbyterians).

The story has a melancholy feel that persists as 23-year-old spinster, Anne Lindsey, who lost her parents and then her relatives with whom she was living, is forced to live with staunch Covenanters who treat her like a servant. As the tale begins, Simon, the Earl of Monleigh, who Anne knows, is in prison in Edinburgh awaiting death while Anne’s benefactors look forward to his execution. Anne looks back at her memories of Lord Monleigh, beginning with the night she met him on the moors high above the ocean, and the rest of the story unfolds.

Monleigh is man who can be a wise, though at times hard, a leader of his clan, fighting to restore his king, but at the same time a charismatic charmer of the lasses. When he focuses his attentions on innocent and beautiful Anne, she has no will to resist. He exposes her to adventure, music and a passion she has not known, but has longed for. He believes he has rescued her from a dismal life, but he has also exposed her to danger, and he offers her no future. He is hunted by the English for his raiding and smuggling, something he does to pay the high English fees levied on the Scots. He is well aware the noose is tightening about his neck.

In Anne’s own words:

“He had enthralled me, bewitched and enraptured me; and I knew I played a dangerous and deadly game by so giving myself into his keeping. He was no god, in truth, or even godly. He was only a man, a mere mortal, who went in leather breeks and a dark cloak lined with scarlet, wearing a long sword at his side and a wicked blue dirk in his belt—who felt anger, boredom, indifference, who loved and hated as other men; who stood taller than most and held his dark head with a greater pride.”

The story is told through Anne’s perspective and in the first person, and somehow that seemed to fit. It is beautifully written with near magical dialog and tender emotions on every page. I cannot recommend it highly enough to those who love the deep historicals from Scotland. It’s a keeper as are all of Jan Cox Speas’ novels.

Since the book is out of print, unless you have an ebook download, you will have to buy it used in paper, but trust me, it will be worth it. And while you’re at it, I recommend getting Bride of the MacHugh, also by Speas, and my favorite.