Megan Bryce’s TO TEMPT THE SAINT – Witty, Clever Tale of a Vicar’s daughter and a nobleman’s son intended to be a Vicar 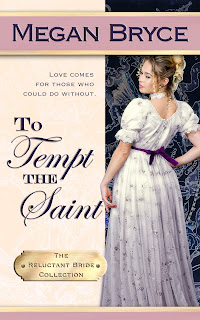 No date is given for the setting of this book. The author lists it as both a Victorian and a Regency so it’s set sometime in the 19th century. It’s the 4th in the Reluctant Bride series. The hero, George St. Clair, the youngest of a viscount’s four sons, has been targeted for the church and trained as a vicar but he has no love for the job. He wallows in the angst of losing his love to his twin and now just drifts along, attending lectures on steam power.

Along comes Honora Kempe, who is in disguise as yet another woman seeking a man to become betrothed so she can get him to cry off and leave behind a large payment for her lost reputation—a reputation that, in reality, was lost long ago with a child out of wedlock. A disgraced vicar's daughter, she is determined to get her revenge and have a life on her own terms. But she meets her match in George St. Clair.

I loved the witty banter, the dry humor. It is a cleverly told tale where its tit for tat the whole book through. And it kept me reading pages. I was a bit surprised, however, that the man trained for the church should fail to wonder at the origin of Honora’s Scripture-spouting. (She quotes verses for every occasion.) Still, weren’t they perfect for each other—the vicar’s daughter and the vicar?