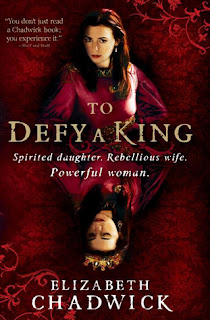 October is Medieval month on the blog and I’m beginning with a great story.

Set in 13th century England, this 6th in the William Marshal/Bigod series is the story of Mahelt Marshal, the eldest daughter of William and Isabelle Marshall, and her marriage to Hugh Bigod, heir to the earldom of Norfolk. If you read The Greatest Knight and The Scarlet Lion first, you will have a solid foundation for this story.

The villain of the story is King John, a cruel tyrant, a murderer of children and a despoiler of women, particularly those wed to his barons. But this is also the love story of Mahelt and Hugh and how their love survived those horrible times. Mahelt is spirited and courageous, like her father and Hugh is a steady, loyal man who loves his wife.

The story begins as the young Mahelt is taken into the Bigod family to be protected until her marriage to Hugh. Then her brothers become King John’s hostages and Mahelt and Hugh are quickly married as her father leaves for his property in Ireland. She must grow up and quickly to handle all she is presented with, including a father-in-law who treats her like chattel.

When King John sets out to subdue the Bigods and her young son is taken hostage, Mahelt faces a heartbreaking battle, fearing neither she, nor her marriage, will survive.

A brilliant weaving of historical fact with fiction that brings this period in England’s history to life. I thoroughly enjoyed it.