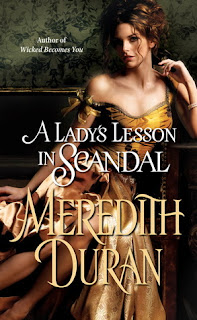 Meredith Duran’s writing is unique, detailed, word intensive, impeccably researched, and so captivating I couldn’t put this story down.

A Lady’s Lesson in Scandal is a Victorian romance, a sort of My Fair Lady with an inheritance twist. It introduces us to Cornelia (“Nell”), who was born a twin, the daughters of the Earl of Rushden. As a young child, Nell was stolen by a nanny who was half crazy, and hidden away in the East End of London. Raised in poverty, she became a factory girl, though she loved books, and in that, was well educated. She survived by her wits and her determination, but suffered terribly from too little food and too little care.

Just before the woman Nell called “Mum” died, she told Nell her father was Lord Rushden, and encouraged her to find him. Nell goes in search of the man she thought did her Mum wrong, intending to shoot him. But she finds instead a new, young Lord Rushden (the earl’s heir), Simon St. Maur, who is her 3rd cousin. Simon, a handsome rake who has inherited the title and lands but no wealth to support them (all the money was left to the earl’s two daughters), recognizes Nell for who she is immediately. He offers to wed her, thereby helping her to become a lady and regain her rightful place and wealth, enriching both their coffers. Nell agrees, realizing only too late she has given Simon her heart.

Simon is fascinated by Nell who is so different from the superficial ladies of society he is used to, but if he cannot persuade the court to accept her as the lost twin, he intends to annul the marriage.

Duran weaves a suspenseful, believable romance, a story of two people caught between a life of wealth and a life of poverty, neither one comfortable in the other’s world, yet perfect together.