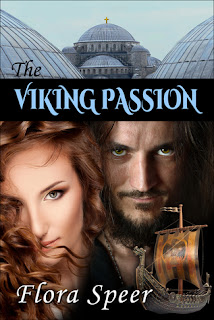 Set in the late 9th century, this well researched, well-written Viking tale does not disappoint. It is rich in character development, rich in the customs of the Vikings and shows what happened to many in England and Ireland whose unguarded villages were easy prey for the marauders from the North.

On the day her brother was to wed her good friend, Lenora’s East Anglia village was struck by the Norseman Snorri Thorkellsson and his Danish Vikings. All the men were killed and she and her close friend were taken as slaves back to the Vikings’ lair in Denmark, where Lenora was given to the chieftain’s youngest son, Erik Thorkellsson. Lenora hates them all but learns what she must to survive. Treachery and hatred abound, as Snorri hates his half brother, Erik, and plots to take all that is his.

As Erik's slave, Lenora travels the trade routes to Constantinople (“Miklagard”), and we get to see much of that ancient world. (“You must have Norse blood, Lenora. You have the Viking passion for adventure, and the desire to see new sights, just as I have.”) It’s interesting and at times intriguing. Lenora must face her growing love for Erik even as she is repelled by the Vikings who stripped her of her family and her old life.

This one held my attention and I recommend it.