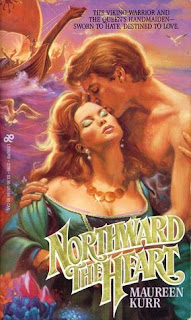 Set in the early 10th century when the Norwegians, Danes and Saxons were all enemies, and all vying for a piece of England, one Dane chieftain wants an alliance with Saxon King Edward of Wessex so they might join forces against the Norwegians. To gain leverage, Raff Olafsson kidnaps Edward’s sister AElfwyn, former Queen of Mercia, with a marriage of convenience in mind. Only it isn’t AElfwyn he has kidnapped—it’s Ambyre of Athelney, her handmaiden, and beloved ward of King Edward.

Ambyre lies to Raff to spare her mistress but wonders what she’ll tell him to escape the marriage. Then Ambyre’s tutor, a skinny Saxon who is in love with her, shows up and claims to be her husband thereby thwarting Raff’s marriage plans. All is quite the jumble until Ambyre falls in love with Raff and gives herself to him. Aware he has bedded a virgin, Raff is livid he’s been deceived.

It’s not your typical Viking romance in that there is no raid where the heroine is taken captive. Still, she is taken by the Danes (what the Saxons called the Vikings) and not returned for most of the story. Then, too, she is fully accepted by the Danes and becomes attached to her enemies. The marriage of convenience Raff has in mind will, for Ambyre, be one of love.

The story is well written, with some excellent twists and turns as Ambyre’s lies are slowly discovered. It held my interest though some will find it a bit slower than many of today’s stories (and it’s 472 pages!). The author took her time developing the relationships between the characters and the people groups populating England (incorrectly referred to as “races”) and obviously did a good amount of research to get the setting and the cultures right. For that I give her full marks.