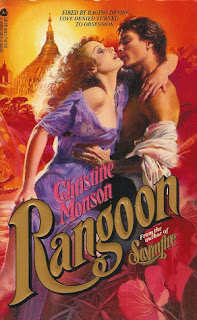 Set Burma in the 19th century in the era of Queen Victoria, this story is brought to us by a master storyteller.

Lysistrata Herriott travels with her doctor father from Boston to the other side of the world—a place where she can escape her relatives and her past. From the very beginning, we know Lysistrata is fearless when she takes off with the locals in a strange country. She is also courageous and altruistic, becoming a nurse in the hospital where people of color are treated for cholera.

In Rangoon, Lysistrata meets the other Europeans and witnesses the racial discrimination that exists around her, for Rangoon is a place of many cultures: Burmese, Indian, Chinese and, of course, British.

Richard Harley (“Ram Kachwaha” to the Burmese) is an enigma, the son of an English nobleman whose mother was an Indian princess, captured by Ram’s father but never wed. Handsome and rich, Harley is accepted into the European society, but he maintains his ties to the other side and observes his boundaries. He wants Lysistrata, but knows he cannot have her in the public’s eye. And because he does not want to love her, he treats her as if he doesn’t care, that is until he captures her and takes her to his palace deep in the jungle, where he tells her she may leave only when he is dead.

But brave Lysistrata is intent on escape…

This story has an intricate plot that brings you into the exotic world of Burma—Rangoon, its other cities, the teaming jungles, its diverse culture and its wild rivers. When Harley takes Lysistrata to his palace, they encounter perilous paths, thugs and wild beasts. You’ll feel the heat, experience the monsoon season and climb treacherous mountain passes. Monson brings us great action and a courtroom drama near the end that will keep you on the edge of your seat.

Lysistrata is a very worthy heroine and Harley a mysterious figure. The dialog is brilliant and there are some wonderful one-liners. One of my favorites is uttered by Lysistrata when, in a humorous mood, she tries to discredit Harley after she has had too much to drink: “Any man who filches women is bound to cheat at cards.”

It is a long book (464 pages) but the story kept me turning pages. (I did want a list of characters, a map and a glossary for all the foreign terms that were not defined, but not to worry; it’s marvelous.) If you want to experience Burma in the late 19th century, this book will take you there. Highly recommended.