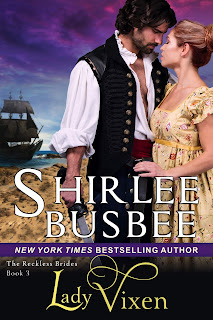 I could not put this one down and highly recommend it. It's on both my Best Pirate and Privateer Romances List and my Best American Patriotic Romances list. Oh yes, it’s also a bodice ripper and a keeper.

Set in England during the years 1808-1814, this is one of those rare and wonderful love stories that sweeps you away to another time and place where you are caught up in the lives of people whose actions will affect not only their own and others' lives but America and England during the War of 1812. Deception and treachery born years ago lead to revenge and then to heartache. Busbee uses real characters, such as the pirate Jean Lafitte, to bring realism to her story as she seamlessly weaves history into a compelling tale. It's what I call a "dense" historical: one where the writing is so complex and so tight you're getting double the story you'd expect in the 538 pages.

Young Nicole Ashford led an idyllic life in Surrey with her wealthy parents and her twin brother until a boating accident one summer took them from her. Made the ward of an uncaring and barely related aunt and uncle who only want her fortune, and learning of their plans to marry her off to their ne'er-do-well son, at 13 Nicole dons the disguise of a young boy and runs away to sea as the cabin boy for Captain Saber, an American privateer.

For 5 years, Nicole sails with him as a boy and Saber pays her little attention. When she is 18, Saber observes her swimming naked on a tropical beach and decides he wants her for his mistress. He bides his time and when Nicole and a seaman (who is really a British spy) decide to destroy English codebooks that Saber has captured, the two are caught.

Using the life of the English seaman as a bargaining chip, Saber forces Nicole to become his mistress, until the American, on a mission to spy for his new country, decides to sail home and resume his identity as Christopher Saxon, grandson of a baron.

And so begins a complex, worthy tale of adventure, rich in history (both England's and America's) and a love that could not be denied.

Should you want to read more, here is the whole Louisiana Series (stand alones but each with a connection to Louisiana and with some overlapping characters).