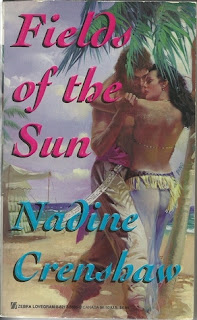 I love the way Nadine Crenshaw breaks rules as she tells a great story. For example, in this one, set in 17th century England, Morocco, the Atlantic Ocean and Brazil, the hero and heroine don’t meet until page 184! And I was perfectly OK with that, as I could not stop reading this fascinating tale.

Both Lady Katherine Heartfield and Sheffield Denton seek adventure and each makes unusual, rebellious decisions that eventually lead them to be captured by pirates and brought to Morocco to serve a harsh master. Katherine arrives 5 years after Shef. First, she was escaping an arranged marriage in Cornwall and then, in London, Cromwell’s men where she cut her hair and disguised herself as a young highborn lad. It is as a boy she is taken from the pirate ship when it arrives in Morocco. Little does Kate know that the Arab master likes pretty boys. But Shef has a plan to escape.

Kate has a wonderfully clever habit of writing letters in her mind to her best friend in Cornwall, Henrietta. These “letters” add a delightful touch to the story as Kate tells Henrietta all she is feeling.

This novel published in 1997 was the last of Crenshaw’s historicals (see list below). Like all of them, they deliver interesting, well-written romances that don’t disappoint. I recommend all of them.