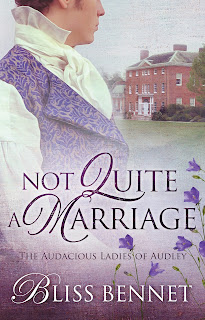 September is Georgian and Regency month, so stories set in the late 1800s and early 1900s will be featured. I’m starting with one by Bliss Bennet.

Set in 1824, just after the Regency, this is the story of Spencer Burnett, Viscount Stiles, and his wife Philadelphia. He’s back from Sierra Leone where he lived for five years having escaped his unwanted wife and domineering father. Now he has returned to England and wants to prove to his wife he’s a changed man. Philadelphia doesn’t trust him and wants the estate promised her, Beechcombe Park, to be a sanctuary for her and the Audley cousins she’d promised to protect. But she’ll give him two months.

Bennet writes very well with well-developed characters and vivid descriptions. This tale features some interesting historical notes about the quest to finally end slavery reflecting significant research. Nevertheless there are many discussions about abolition that do go on. If you find the subject of interest, you will not mind. They are well done.

As Spencer agrees with his wife’s view of the world and defends her to his overbearing father, both Delphie and the reader begin to recognize a change in him. Their marriage just might have a second chance.

For lovers of deep historical detail, this will be a fascinating read.