Reading this series is like watching a juggler with 20 balls in the air, hoping he doesn’t drop one. You can’t possibly remember all the characters or historical figures as you are swept along but, captivated, you don’t mind. 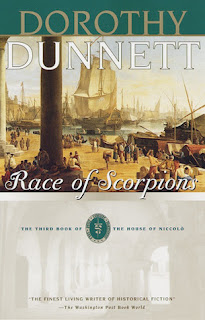 Set in 1462, this one finds Nicholas at 21, wealthy and looking for his next adventure. Marian, his beloved wife has died and his two stepdaughters have locked him out of the family business. So he pursues his future elsewhere. He and his private army are wanted by both factions seeking to control Cyprus. Both contenders for the throne, Queen Carlotta and her bastard brother, James, are vying Nicholas’ support.

As always, Nicholas must deal with adversaries and allies, from the courtesan Primaflora, who becomes his mistress and then something more, to the Mameluke commander, Tzani-Bey al Ablak, an evil man who has cruelly used Nicholas and Nicholas vows revenge.

Several things were unclear to me at the beginning, left over from the last book. Why does everyone always think the worst of our hero? Why does Katerina van Borselen hate him when it was she who came to his bed—twice? Why do his friends often assume his motives are bad? Well, this time we get answers to many of those questions as Nicholas and his merchant team confront dangers and treachery in Cyprus. A worthy story and I’m on to the next one.

The House of Niccolo Series: