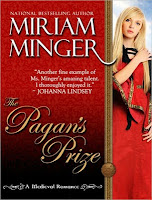 This was my first by Minger and it’s a worthy Viking tale with a twist—it’s set in Russia in 1024.

Viking warrior Rurik Sigurdson, a Varangian (mercenary) on a mission for Grand Prince Yaroslav, ruler of Rus land (Russia), plans to to spy on the armies of Yaroslav’s enemy—his younger brother, Prince Mstislav. In the process, Rurik unknowingly captures Princess Zora, Mstislav’s much loved bastard daughter. Rurik believes she is the concubine of another man who he can use to gain intelligence. Zora has temporary amnesia that puts her in a dazed state most of the time. In a harebrained plan to find out who her lover is, Rurik makes love to the dazed woman only to realize she is a virgin (really it’s rape since she couldn’t knowingly consent). Zora wants to escape to return to her father and her betrothed, but Yaroslav (her uncle) forces her to wed Rurik.

I loved Zora. She was feisty and courageous and took no guff from Rurik. That is, until the marriage, after which she crumbled whenever Rurik touched her. Rurik was a reasonable man and a strong leader of his people, though he treated woman as mere comforts (until Zora). He kept 6 concubines who had given him 5 children. Into this comes innocent Zora. There were some improbable moments (like when his concubines were fine with being married off to Rurik’s men), but it is well written, fast paced and held my interest. It is clear that Minger has taken pains to get the history right, too.

Her other Viking novel is TWIN PASSIONS, which I also plan to read.
Posted by Regan Walker at 7:41 AM