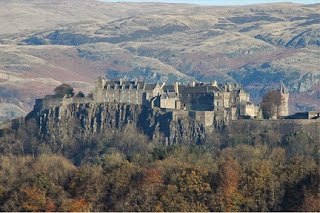 As Geddes MacGregor once said, “No one in Scotland can escape from the past. It is everywhere, haunting like a ghost." Scotland’s past is the subject of my list below, romance novels I have come to love that are set in Scotland, some in that magical part of Scotland called the Highlands. Others may just feature a Scots hero. All are rated 5, 4 ½ or 4 stars. Enjoy!

• A Dangerous Love, The Border Lord's Bride, The Captive Heart, The Border Lord And The Lady, The Border Vixen and Bond Of Passion (from The Border Chronicles) by Bertrice Small
• A Gentle Feuding by Johanna Lindsey
• A Kingdom of Dreams by Judith McNaught
• A Year and a Day by Virginia Henley
• Almost Heaven by Judith McNaught
• Beloved Rogue by Penelope Williamson
• Bound to the Highlander by Kate Robbins
• Bride of the MacHugh by Jan Cox Speas
• Charming the Shrew and Daring the Highlander (MacLeod duology) by Laurin Wittig
• Come The Morning, Conquer the Night, Seize the Dawn, Knight Triumphant, The Lion in Glory, When We Touch and The Queen’s Lady (the Graham series) by Heather Graham Pozzessere
• Desiring the Highlander by Michele Sinclair
• Devil of Kilmartin by Laurin Wittig
• Devil’s Mistress by Heather Graham
• Emerald Embrace by Shannon Drake (aka Heather Graham)
• Forever My Love by Rebecca Brandewyne
• Heartstorm by Elizabeth Stuart
• Highland Moon by Judith E. French
• Highland Rebel by Judith James
• Highland Warrior, Highland Outlaw and Highland Scoundrel (the Campbell trilogy) by Monica McCarty
• Highlander’s Hope (Regency based in Scotland) by Collette Cameron
• If You Dare, If You Desire and If You Deceive (the MacCarrick Brothers trilogy) by Kresley Cole
• Kilgannon and The Wild Rose of Kilgannon by Kathleen Givens
• Knight of Fire by Shannon Drake (aka Heather Graham)
• Laird of the Mist by Paula Quinn (and all six in her MacGregor/Children of the Mist Series)
• Lord of Fire by Emma Merritt
• Moonstruck Madness by Laurie McBain
• My Lord Monleigh by Jan Cox Speas
• My Wicked Enchantress by Meagan McKinney
• On a Highland Shore and Rivals for the Crown by Kathleen Givens
• Silk and Steel by Cordia Byers
• Sound of the Heart by Genevieve Graham
• Snow Raven by Patricia McAllister
• Tempted and The Border Hostage, duology by Virginia Henley
• The Bedeviled Heart, The Daring Heart and The Bold Heart by Carmen Caine
• The Border Lord by Jan Westcott
• The Chieftain’s Curse by Francis Housden
• The Guardian by Margaret Mallory
• The Lady and the Laird, Nicola Cornick
• The Legend and The Destiny by Kathleen Givens
• The Magnificent Rogue by Iris Johansen
• The Passionate One, The Reckless One and The Ravishing One (the McClairen’s Isle trilogy) by Connie Brockway
• The Pride of Lions, The Blood of Roses and Midnight Honor by Marsha Canham
• The Renegade (first released as The Renegade and The Rose) by Christine Dorsey
• The Queen’s Lady by Shannon Drake (aka Heather Graham)
• The Scotsman by Juliana Garnett (aka Virginia Brown)
• To Beguile a Beast by Elizabeth Hoyt (one of the Four Soldiers series)
• To Conquer a Highlander, Highland Hellcat and Highland Heat by Mary Wine
• White Knight by Jaclyn Reding
• Without Honor by Elizabeth Stuart


And a few outside my usual reading:

• Outlander (the only time travel on the list; not all in the series take place in Scotland , though the hero is a Highlander) by Diana Gabaldon
• Thirty Nights with a Highland Husband (and others in the Daughters of the Glen series, the only fantasy on the list) by Melissa Mayhue
• A Hunger Like No Other (the only paranormal on the list, but it’s a superb story and features a Highland hunk to die for) by Kresley Cole