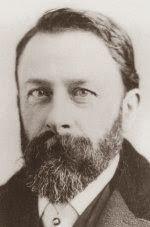 Albert Bierstadt was among the most internationally honored American artists of the nineteenth century. Born in Solingen, Germany, he emigrated at age two to America with his parents and his two brothers. The family settled in New Bedford, Massachusetts, where his father became established as a barrel maker. He studied (1853-57) painting in Dusseldorf, Germany, and Rome and traveled extensively on the Continent. Although he had entered that period of formal training with only rudimentary capabilities, he emerged from it an ambitious, technically proficient master whose tastes for European scenery and society had been considerably enhanced in the process.

Bierstadt painted the West as one who loves its beauty. His paintings evoke romantic images and stir feelings in us even if we have lived our lives in the American West.


As you read the western historical romances I've reviewed and those on my "best list" I'll post toward the end of June, picture the west as Bierstadt saw it: A place of great majestic open spaces and colors more beautiful than any many could create on his own.