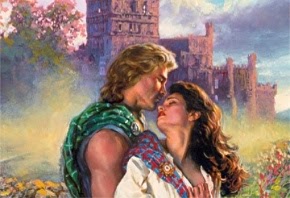 As Geddes MacGregor once said, “No one in Scotland can escape from the past. It is everywhere, haunting like a ghost." Scotland’s past is the subject of my list below, romance novels I have come to love that are set in the past of Scotland, most in that magical part of Scotland called the Highlands. Some are romances with a Scots hero. All are rated 5, 4 ½ or 4 stars. Enjoy!