Spend the Holidays in Regency England: The Shooting Party by Regan Walker 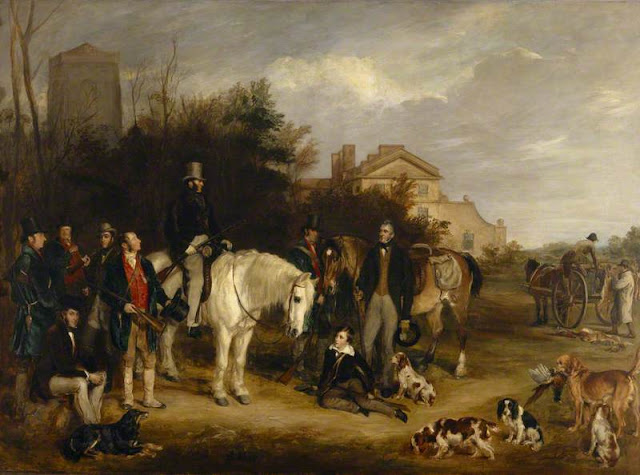 In England, during the Regency (1811-1820), when Prince George the son of George III reigned as regent and  the London Season ended in mid-August, the season of house parties in the country began. They could last from a weekend up to several weeks. Included in the activities for the invited nobility and gentry would be shooting of game birds and fox hunting. (Fox hunting, or “riding to hounds” began after the first frost and ended after the last frost.) Shooting parties extended over the fall and winter and shooting was regarded not only as a sport but exercise, an antidote to gout.

The fowling season began with grouse season, but other game bird seasons followed quickly after. Partridge, ducks, and geese were all hunted during the fall. Hunting for pheasant occurred principally from November through January.

But hunting was not the only pursuit. In country estates, the nobility and gentry could engage in various other activities.

“...In the country, hunting, shooting and fishing were almost obligatory during the relevant seasons, but all forms of sport were popular, including archery, badminton, cricket and tennis. Spare horses for the guests to ride were always on offer at such houses, as well as spare stabling for those who preferred to bring their own. Guests of a more sedentary nature took their daily ‘constitutional’, walking or driving round the grounds. On rainy days the younger generation played billiards or chased each other round the house on treasure hunts, or played ‘Hunt the Squirrel’, a form of ‘Sardines’, while the dowagers played chess and wrote letters.”

Of course, eating and flirting were popular, too, and balls might be held in the evening. If a young marriageable woman had not found her man during the Season, this was her chance.

A fall house party in the elegant (and historically accurate) country estate of Wimpole Hall in Cambridgeshire is the setting for several scenes in my Christmas story, The Twelfth Night Wager. It was in just such an atmosphere that the redheaded rake, Christopher St. Ives, Lord Eustace, pursued the virtuous widow, Grace, Lady Leisterfield—all because of a scandalous wager.

The sport of shooting birds on the wing developed in Europe after the invention of the flintlock, which used flint and steel to ignite the gunpowder. It was popular in Regency England. Dogs were bred first to point out game birds for netting and then later bred to flush birds from the bush and retrieve fallen birds. “To flush” is to scare the game birds into flight from their hiding places. And the hunters used specific dogs for that.

A wily pheasant will not move, even when a dog is close. Its color camouflages it well in the brush so that a hunter can walk right past it without ever noticing the bird. The oldest pheasant hunting dog breeds include English Springer Spaniels, Cocker Spaniels, English Setters and Pointers.

In the morning the hunters might send a Springer Spaniel into the brush to flush the birds into flight. By mid-day, the hunters would be searching for the ground fowl resting in their roosting places in grassy stands and marches and along edges of fields and ditch banks. They used smaller, Cocker Spaniels, for this.
The Birds

The hunters, waiting behind a belt of pines and beeches for birds to burst over the trees, gained from their knowledge of the birds’ habits. For example, pheasants would leave their nightly roost sites in the morning about two hours after sunrise to move around in thick brush and dense patches of grasses. An hour after rising they could be seen foraging for food in the fields or picking at gravel or grit near roads. Nearly all of the pheasants would be searching for food at this time. Their unvarying schedules meant that hunters knew the precise time to set out to hunt the birds and where to find them. By mid-morning, the pheasants would stop feeding and seek cover in thick brush or in trees until late afternoon. Among the birds hunted in addition to pheasants were grouse and partridge.


Join the party and spend the holidays in Regency England with The Twelfth Night Wager! 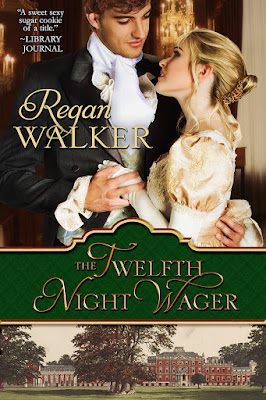 “A tale told with humour and heart; the perfect read for a cold winter's night.” – Good Friends, Good Books

An evening at White’s with his friend Lord Ormond gave rise to Christopher St. Ives, Viscount Eustace’s scandalous wager: Eustace must seduce, bed and walk away from the lovely Lady Leisterfield, all by Twelfth Night. A challenge, indeed, since Grace, Lady Leisterfield, was known to all as a virtuous widow.

With her husband having passed a year ago, Grace shed the drab colors of mourning to don an elegant gown for her theater outing with Muriel, the Dowager Countess of Claremont. Rogues would attend, promised the countess, and the possibility excited Grace. She had no idea she was the subject of a wager agreed to by the handsome, dashing and dangerous man called The Redheaded Rake.


On Amazon. See the Pinterest Storyboard.
Posted by Regan Walker at 3:30 AM