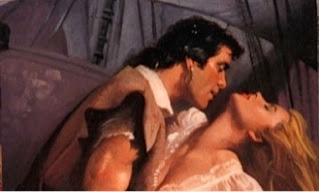 Who doesn’t love a good pirate or privateer saga? All that capturing, swashbuckling and romancing on the high seas—oh yes! Gets my blood boiling just thinking about it. While there are lots of pirate and privateer romances out there, not all are great ones. Here’s my list of those I have read and rated 4 or 5 stars. Some do not have pirates as such, but may have a swashbuckling sea captain or a privateer. In almost every case, part of the story takes place on the high seas.

And, if you want to read a seafaring adventure with a British privateer hero, you might enjoy my own novels, To Tame the Wind and Wind Raven. Ah yes, love on the High Seas!
Posted by Regan Walker at 1:00 AM