When the King of Scots Married a Saint


When Edward the Confessor died, Harold of Wessex was named King of England, only to be slain by the Norman Conqueror at Hastings. It was then that Margaret’s young brother, Edgar, was named king—but never crowned because the Normans took over England.

Margaret’s family fled to Scotland where they sought refuge. And that is what brought her to Malcolm’s attention.

Perhaps Margaret believed that God—whose will she ever sought to obey—had a purpose for her life different from that she had first envisioned. That might have been what persuaded her to accept Malcolm’s suit. In any event, in 1070, she became Malcolm’s queen, devoted to her warrior husband and to improving the lot of the poor Scots and Saxons who gathered in Dunfermline around the royal seat. That she left a lasting legacy cannot be denied. In 1250, she was made St. Margaret.

In the more than twenty years they were married (they died within days of each other), Margaret gave her husband six sons and two daughters. Three would become Kings of the Scots and one daughter would become a Queen of England. That Margaret’s rough, warrior husband deferred to her, at least in matters of their family, can be seen in the names given their sons—Edward, Edmund, Ethelred, Edgar, Alexander and David. Perhaps, in agreeing to such names, Malcolm saw the potential for his sons to one day claim the throne of England, for as long as Margaret’s younger brother, Edgar, remained unmarried and childless, which he did, his rights to rule England would be transmitted through Margaret to her children.

Margaret was an intelligent beauty, arguing with the Scottish clerics about what she saw as errors in their religious observances that differed from what Rome prescribed. While Malcolm was illiterate and Margaret read to him, she spoke Gaelic poorly and he spoke it well, often interpreting for her when she held councils to debate with the clerics. Because she treasured her copy of the Gospels, Malcolm had it encased in gold and decorated with jewels. Not a bad gift for a rough, warlike man.

Margaret cared for the orphans and poor, often pillaging her husband’s gold to aid them. This amused, but did not anger, him. He even joined her in ministering to the less fortunate. Margaret was a loving mother and a devoted wife all the days of her life. I like to think their unlikely match was one made in Heaven. Margaret, I have no doubt, would agree.
I did hundreds of hours of research for Rebel Warrior, many hours devoted to understanding Margaret and Malcolm so I could properly set my characters in the royal court. I hope you enjoy meeting them!

When your destiny lies far from where you began … 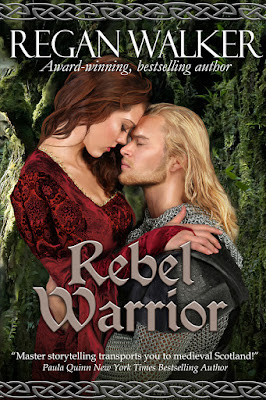 The Norman Conqueror robbed Steinar of Talisand of his noble father and his lands, forcing him to flee to Scotland while still recovering from a devastating wound. At the royal court, Steinar becomes scribe to the unlettered King of Scots while secretly regaining his skill with a sword.

The first time Steinar glimpses the flame-haired maiden, Catrìona of the Vale of Leven, he is drawn to her spirited beauty. She does not fit among the ladies who serve the devout queen. Not pious, not obedient and not given to stitchery, the firebrand flies a falcon! Though Catrìona captures Steinar’s attention, he is only a scribe and she is promised to another.

Catrìona has come to Malcolm’s court wounded in spirit from the vicious attack on her home by Northmen who slayed her parents and her people. But that is not all she will suffer. The man she thought to wed will soon betray her.

When all is lost, what hope is there for love? Can a broken heart be mended? Can a damaged soul be healed?

Rebel Warrior on Amazon US and UK

Email ThisBlogThis!Share to TwitterShare to FacebookShare to Pinterest
Labels: Medieval, Regan Walker, Scot/Highlander, When the King of Scots Married a Saint