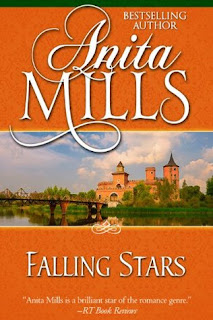 August is Exotic Locales month on my blog, so plan to take a vacation of the mind to some very different settings! I'm starting with Russia.

Anita Mills serves up an unusual story in Falling Stars, sweeping the heroine from the ballrooms of London to the grand palaces of Russia.

The story begins in London in 1814 where Katherine (“Kate”) Winstead, and her younger sister Carissa, are enjoying the London Season with their brother, Harry, Baron Winstead. [Usually the title and surname are not the same but here they are.] Harry’s best friend is Bellamy (“Bell”), Viscount Townsend, a rake of the first order with the face of an angel. He and Kate constantly exchange barbs and unpleasant truths about each other.

By all accounts, Kate is both short (5 feet tall) and plain, and at 22 “on the shelf”, yet when the Russians come to town with young Czar Alexander, all that changes. For some reason known only to his sister Galena and him, handsome Count Alexei Volsky takes a fancy to Katherine and quickly offers for her. Now why would a handsome Russian count do that? Why, indeed. To have such an offer as a plain girl is unheard of and Katherine does not fail to accept, particularly when the count’s sister, Galena, tells Kate the huge betrothal ruby on her finger proves Alexei loves her.

I thought Mills did this part especially well, preserving the mystery as the wool is pulled over Kate’s eyes. Ah, but no reader will fail to wonder just what’s going on.

Meanwhile, Viscount Townsend must escape a woman in London who has set a trap for him, so he decides to go to Russia when Kate and the Russian entourage leave town. And the plot thickens.

Russia is a very foreign place to Kate: the language, the people and the customs. She feels trapped inside Alexei’s huge estate as the snows pile up outside. There, she learns she is pregnant and is thrilled—until she discovers, to her horror, her marriage is a sham and underneath it all is a horrible truth. Kate decides (reasonably so) to flee Russia in winter. And who should come to her rescue but Bell, Viscount Townsend.

This is an unusual, well-told tale that kept me turning pages. Mills did very well with the Russian culture and scenes in and around Moscow in the winter. I felt the cold and lamented the loss of green England along with Kate. You must be patient to see the hero as an actual hero (though there are earlier hints) but he does come around in the end.