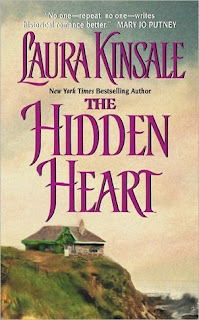 Set in 1863 in South America, the Pacific and England, this is the story of Tess Collier, who has traveled the world with her natural scientist father, the Earl of Morrow. As he is dying in a jungle, she promises him she will sail home to England and marry.

Her father’s trustee arranges passage for her on the clipper ship owned by Gryphon Meridon (aka Captain Frost) and hires the man to protect her from inappropriate suitors once they reach England. Gryf has been wronged many times: he lost his title, his parents and his wealth to an evil uncle. Though he is “half in love” with Tess, Gryf believes he can never have her as he has nothing to give. Notwithstanding his lack of fortune, Tess falls in love with Gryf, but a misunderstanding leads her to marry another—Gryf’s twisted cousin.

Kinsale delivers a wonderful story with a complicated plot that will have you shaking your head thinking these two will never get together. There’s a lot of shipboard time in this romance for you high seas lovers, too. Kinsale portrays life aboard Gryf’s ship very well. Then there is the jungle, the animals—and Tahiti!

If you long for travel to distant places, but won’t be going any time soon, this romance is a great one to take you there. It has a complex plot with the typical Kinsale twists and turns that will have you tearing out your hair. And it’s good.

I do have to mention a few improbable elements and plot devices in this story that frustrated me—like the conversation Tess and Gryf should have had (that any normal couple would have had) that would have explained everything. Or when Gryf goes to the mansion to rescue Tess and fails to ask the servant if Tess is even there (a likely question). Or the strange failure of Gryf to explain what happened when he is accused of murder. Or his refusal to see her when we know he loves her. Of course, all those unlikely things kept the story and suspense going….

Buy on Amazon
Posted by Regan Walker at 1:00 AM