Mineral pigments, such as red ochre, yellow ochre, umber and lime white, were used, dug out of the earth. Painters made chalks ready for drawing. Natural red chalks were popular from about 1500 to 1900. Artists such as Michelangelo and Rembrandt used this medium to produce some of the most treasured art.

Medieval Italian painters used green earth for painting under flesh tones. It's commonly used synonym is "Verona green", from Verona, a city in the northern part of Italy. Malachite and verdigris were also used as greens.
Orpiment, a deep orange-yellow colored arsenic sulfide mineral, was used for yellow, together with yellow ochre. Before the late 15th century, the color orange existed in Europe, but without the name; it was simply called "yellow-red".

The term “purple” originally referred to a reddish dye obtained from various mollusks found in the Mediterranean. It wasn’t the color we think of today, which is more like amethyst or violet. The picture on the left is Byzantine Emperor Justinian I wearing Tyrian purple.


In addition to azurite, which had been used as a blue color since the time of the ancient Egyptians, ultramarine was by far the most important blue in the Middle Ages.

Ultramarine is a deep blue color, originally made from grinding Lapis Lazuli into powder. The name comes from the Latin ultramarinus, and means literally "beyond the sea", owing to the fact the pigment was imported into Europe by Italian traders during the 14th and 15th centuries from mines in Afghanistan.

In Anglo-Saxon churches before the Norman Conquest, entire walls were often painted by plastering over wood timber or wattle work or stone. The plastered wall was then lime-washed, readying it to receive mineral color paints, which were then fixed with casein made from skim milk. Apart from the beauty they imparted during services, the wall paintings served as a Biblia Pauperum, a “Poor Man's Bible” illustrating stories from Scripture, scenes from the lives of saints and allegorical lessons.

You can get an idea of the colors they wore through the art and stained glass of the time. During the Renaissance, the color blue was associated with purity, and ultramarine was used to striking effect in paintings of the Virgin Mary, where she was almost invariably depicted wearing ultramarine blue garments. The high price of the pigment, sourced in Afghanistan, also meant that its use was appropriate in the case of a noble subject such as the mother of Christ.

It was not until the advent of the monumental cathedral and church building campaigns in the 11th and 12th centuries that the demand for colored glass began to increase significantly, reaching its highest level in the 14th and 15th centuries. The stained glass of this period reflected the jewel-toned colors they prized.

The Canterbury Cathedral still has a few original stained-glass windows, dating from the 12th and early 13th centuries, including: Adam delving (digging), circa 1176 (the oldest surviving window), Henry II with Archbishop Thomas Becket and the Virgin Mary and King Josiah.

In the early Medieval Era, black was not generally a favored color. The one exception was the fur of the sable, an animal of the marten family, used to trim the robes and gowns of royalty. However, in the 14th century the status of black began to change. High-quality black dyes began to arrive on the market, allowing garments of a deep, rich black.

Magistrates and government officials began to wear black robes as a sign of the importance of their positions. Laws in some parts of Europe prohibited the wearing of certain colors by anyone except members of the nobility. The famous bright scarlet cloaks from Venice and the peacock blue fabrics from Florence were restricted to the nobility. The wealthy bankers and merchants of northern Italy responded by changing to black robes and gowns but, as you might suspect, they were made with the most expensive fabrics.

Lest you forget, the Nordic people we call the Vikings lived during the medieval era and they were great traders. They also loved bright colored clothes and used natural dyes to obtain them. When they came to England in the 9th century, no doubt they brought their vivid colors and fabrics with them. Hence, the Anglo-Scandinavians living in York at the time of my story in Rogue Knight would have worn bright colors and the heroine, Emma, does.

Ulla Mannering, an archaeologist at the Danish National Research Foundation's Centre for Textile Research at the National Museum, states:

"Blue and red were popular colours throughout the Viking Age. In general, they all wore colourful clothes with patterns and sewn-on ribbons. Archaeologists have come across examples of colours covering the entire colour palette.”

Through their trading and voyages to various parts of Europe, Vikings also had access to silk and ribbons with silver and golden threads, though only the elite would have worn them.
Wool, the chief textile fiber of the Viking Age, was available in white as well as many different natural shades of browns and greys. Such shades could be and often were spun and woven without ever being dyed. Wool dyes very easily, though, and many finds of wool from the Viking Age were dyed in once-bright colors.

Linen does not take most historic dyes readily, even when a mordant (a fixative) is used. Accordingly, linen was often bleached or left its natural color (grey if dew-retted, straw if water-retted). Substantive dyes such as woad (a blue dye made from leaves of the woad plant), are fairly successful. As a result, blue linen may have been more common than we thought.

And don’t forget the red and white striped sails of those Danish raiders! 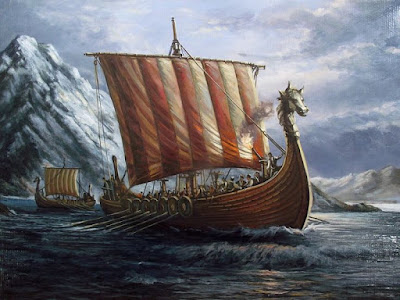 All this is to say that people don’t really change much. They love variety and, in a world of colorful flowers, minerals and beautiful scenery, why wouldn’t the people living in medieval times create for their clothing the rich colors they saw in nature? Reading my stories you will see many colors. 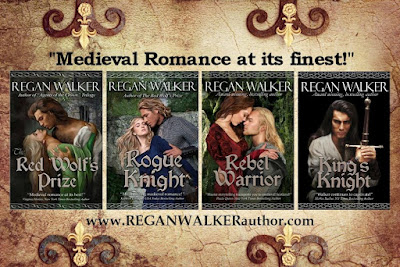 As you read my medieval romances, you'll not be surprised when you see William the Conqueror in a purple cloak, or the Danish and Scottish kings wearing crimson and my heroine donning a sapphire or emerald gown. It's what they wore!


The Medieval Warriors on Amazon. King's Knight is now available for preorder on Amazon.
Posted by Regan Walker at 1:00 AM