The Longbow in England by Regan Walker


One central feature to each of my medieval stories is the Welsh... er, the English longbow. How long has the longbow been in England and where did it come from?

The success of the longbow in the 14th and 15th centuries is well known, but was the longbow used in England before the Norman Conquest in 1066?

While the subject is one for debate, there is good evidence that the longbow was in England long before William the Conqueror rode up Senlac Hill.

Today I share some of my research from my Medieval Warriors series.

The longbow is believed to have been introduced to Britain by the Vikings (especially the Norwegians and the Swedes, who used it against the Welsh in the 7th century). But the Welsh were quick to take up its use, becoming experts. Military historian Robert Hardy states they used it effectively against the invading Saxons, repelling Ralph, Earl of Hereford in 1055. One estimate from the time puts the English casualties at five hundred while the Welsh suffered no losses at all. Alas, the English did not take up the longbow or the Battle of Hastings might have turned out differently.

The Welsh bow could have been of yew or, at least by the 12th century, wild elm. The arrow shafts might be of hazel, pine or ash and the fletchings of goose, swan or eagle feathers. The traditional bow prior to the beginning of the 14th century was a self bow between four and five feet in length, known as the “shortbow.” This weapon was drawn to the chest rather than the ear, and was much weaker than the longbow. In 1985, Jim Bradbury reclassified this weapon as an ordinary wooden bow, reserving the term “shortbow” for short composite bows.

In 2005, Hardy suggested the shortbow was a myth and all early English bows were a form of longbow. In 2012, Richard Wadge added to the debate with an extensive survey of iconographic and archaeological evidence, concluding that longbows co-existed with shorter self-wood bows in England in the period between the Norman Conquest and the reign of Edward III, but that powerful longbows shooting heavy arrows were a rarity until the late 13th century.

The Bayeux tapestry shows only one Saxon bowman with a short bow. The rest of Harold's forces use swords, spears and battle-axes. The Norman archers from Louviers and Evreux who, according to tradition, won William's victory for him, also used the short wooden bow.

It is believed by some that Southern Wales was the home of the longbow, based on the historical writings of the late 12th century cleric Silvester Giraldus Cambrensis. Cambrensis was Archdeacon of Brecknock, servant of King Henry II and his son, Richard the Lion-Hearted, and co-adjutor in administration with the Bishop of Ely during the Third Crusade. He is best remembered for is his chronicle, The Itinery Triugh Wales.

In his chronicle, Cambrensis describes the archery of Southern Wales. He notes that a tribe called the Venta were "more accustomed to war, more famous for valor, and more expert in archery, than those of any other part of Wales."

But even before the Vikings brought the longbow to the Welsh, the longbow was in England. The earliest bow, found at Ashcott Heath in Somerset, dates to 2665 BC.

E.G. Heath, author of The Grey Goose Wing and A History of Target Archery, notes that several well-preserved longbows were recovered from Saxon burial galleys found at Nydam Moor in Denmark in 1863. They have been dated to between 200 and 400 A.D. Dr. Elizabeth Munksgaard has verified that the Nydam bows in the National Museum of Denmark number seven and are self-wooden D-shaped bows between 5 feet 7 inches and 6 feet long. One of the bows has a nock of horn.

I found all this fascinating, so it is not surprising that archers are featured in all of my medieval stories where I give the Welsh credit for their skill. In The Red Wolf’s Prize, Rebel Warrior and the latest, King’s Knight, it is the Welshman Rhodri who teaches the longbow to several of my characters and fashions smaller bows for the women, including my heroines, Serena and Merewyn. In Rogue Knight, the Conqueror’s archers shoot at the Danes from the castle in York in 1069. I hope you enjoy the battle scenes where the archers are in the forefront. And the scenes where the Welsh archers are shooting from the trees.

See my Medieval Warriors series on Amazon, now in a boxed set for your Kindle!  (You can still order the individual books both in ebook format and in print.)

The 4th in the series, King’s Knight, just won the RONE Award for best medieval romance. 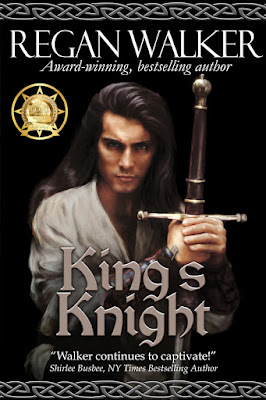 Dubbed the Black Wolf for his raven hair, his fierceness in battle and his way with women, Sir Alexander of Talisand attacked life as he did the king’s enemies. But acclaim on the battlefield and his lusty escapades did not satisfy. King William Rufus would bind him to Normandy through marriage to one of its noblewomen, but the only woman Alexander wanted was a commoner he had saved from a terrible fate.

The shame of being the child of a Norman’s rape dogged Merewyn’s steps from her youth. Determined never to be a victim of a man’s lust like her mother, in Wales she donned the garb of an archer and developed extraordinary skill with a bow. Despite her fair beauty, men now keep their distance. No longer in need of protection from other men, can Merewyn protect herself from Alexander when he holds her heart yet can never be hers?

Order King's Knight on Amazon US, Amazon UK and Amazon Canada.
Posted by Regan Walker at 1:00 AM