Since it's Western month on Historical Romance Review, allow me to introduce you to one of my very favorite painters of the American West... Albert Bierstadt of the Hudson River School of American artists. 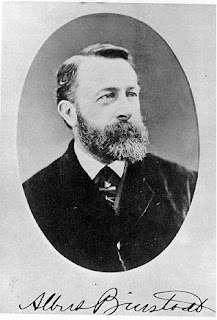 In 1858, he joined the expedition of Colonel F. W. Landers to survey an overland wagon route to the Far West. This trip to the west including the territories of Colorado and Wyoming was to procure sketches for a series of large-scale landscape paintings of the American West. Back in New York, he painted a sequence of canvases that secured his reputation as a "Western" artist. He made two additional western journeys, one in 1863, the other from 1871 to 1873.