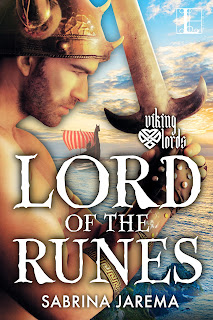 Set in Norway in winter 850 AD, this is the story of Asa Sigrundsdottir, a shield maiden, and Eirik Ivarson, the warrior she discovered frozen on his horse in the snow. Eirik had fled his home when outcasts attacked and killed his father, the jarl. Struggling with one of the attackers, he went over a crest into the sea.

Revived at Asa’s home, Eirik returns the kindness her people have shown him by reading the runes for the people, as he learned from his mother, and helping Asa carve the runes into the dragonhead she is working on for the stem of a longship.

Asa is afraid of a man’s touch from an incident six years’ earlier. The author was very slow to reveal what it was. From the beginning I assumed it was a rape (Eirik assumed it was abuse). Anyway, at the suggestion of her brother, Asa learned a warrior’s skills to be able to protect herself. In doing so, she earned the respect of the warriors, a shield maiden fighting alongside them.

Eirik tells no one he is a jarl or even where he comes from, which seemed odd, but blends in with the other warriors, fighting when the village is attacked by outcasts. He spends much of his days carving a stone tribute to Asa’s dead father, the former jarl of her people. Her brothers wonder just where he goes each day, but no one follows him to the nearby shed where he works.

Eirik had to be the most gentlemanly Viking I’ve ever encountered: polite to all, sensitive to Asa’s every mood, caring of her dark past which he thinks was abuse, and willing to do whatever he can for her with never a cross word. Asa did nothing to encourage his affection. It seemed to be mostly an attraction on his part until the end.

The story reflects the author’s considerable research into the Norsemen’s pagan beliefs and religion. Beautifully written, much of the story is taken up with the description of applying the magical runes to Asa’s dragon head that seems to come alive under Eirik’s touch. One could have wanted more description of the setting, the winter landscape, the wildlife (never heard a wolf; never saw a dog; the men went hunting and brought back elk, but we didn’t see the hunt or the elk), and even the inside of the longhouse where most of the story took place I wanted more description. The characters are well developed, especially Asa’s twin brothers and Estrid, Asa’s jealous cousin who meant her ill.

Recommended for those who love Viking stories steeped in Norse mythology.
Posted by Regan Walker at 8:39 AM