A Short History of Valentines by Regan Walker 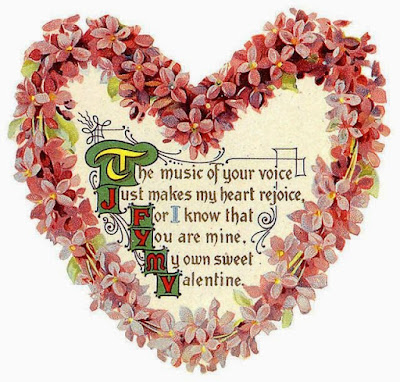 Though St. Valentine’s Day has been celebrated for a very long time, the Valentine’s Day cards we send today, and their romantic precursors with pictures, real lace and ribbons, didn’t really come into fashion until the mid 19th century with the Victorian era. However, that didn’t mean that lovers in earlier eras didn’t observe the day. Of course, they did.

I don’t doubt that since the beginning of human history, lovers have found a way to send each other notes of their love. But Valentine’s Day was first associated with romantic love in the circle of Geoffrey Chaucer in the 14th century when the tradition of courtly love flourished. By the 15th century, it had evolved into an occasion in which lovers expressed their love by presenting flowers, offering confectionery and sending notes, sometimes in verse. By then, too, the heart was a symbol of love. In the mid 17th century, Samuel Pepys recorded the celebration, including gift giving among the wealthier members of society.
The writing of special notes and letters for Valentine’s Day gained widespread popularity as early as the 18th century. The modern cliché Valentine's Day poem we remember comes from this time and the collection of English nursery rhymes Gammer Gurton's Garland (1784):

The rose is red, the violet's blue,
The honey's sweet, and so are you.
Thou art my love and I am thine;
I drew thee to my Valentine:
The lot was cast and then I drew,
And Fortune said it shou'd be you.

By the time we arrive in Regency England, nearly three decades later, the romantic communications would have been handwritten on ordinary writing paper and may have included verse and other small items of sentimental value. Writing paper could have been procured from Hatchard’s Book Shop and other shops that stocked such items. The love notes would have been exchanged between only unmarried adults, unlike today when we send Valentines to everyone.

Papers made especially for Valentine’s Day greetings didn’t begin to be marketed until the 1820s when their use became fashionable in both Britain and the United States. According to Hone’s Every-Day Book (1826): “Two hundred thousand letters beyond the usual daily average, annually pass through the two penny post-office in London on St. Valentine's Day.” 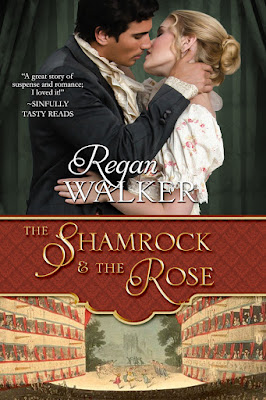 A stint playing Portia at the Theatre-Royal at Haymarket in London, a lost valentine and a dangerous desire…

“A great short story of suspense and romance; I loved it and can't wait to read more by Ms. Walker.”
~ Sinfully Tasty Reads

In my Valentine’s Day story, The Shamrock & The Rose, set in London in 1818, the heroine, Rose Collingwood, has assumed another identity in order to play the part of Portia in The Merchant of Venice at the Theatre-Royal Hay-Market. She has many admirers and receives many such love notes from her adoring fans.

At one point a character notes that Hatchard’s bookshop is “nearly sold out of writing paper” trying to accommodate its customers’ demands for supplies to create the love notes.

Rose receives several love poems from a mysterious man who does not sign his notes, a man who would have her against her will.

One whimsical love poem delights her. It’s from the Irish barrister Morgan O’Connell, who has taken a fancy to the beautiful woman he has discovered is the very actress he so admired one night at the theater.

In the spirit of those long ago lovers, try making your own Valentine! And celebrate the day in Regency London with The Shamrock & The Rose!

Email ThisBlogThis!Share to TwitterShare to FacebookShare to Pinterest
Labels: A short history of Valentines, Regan Walker