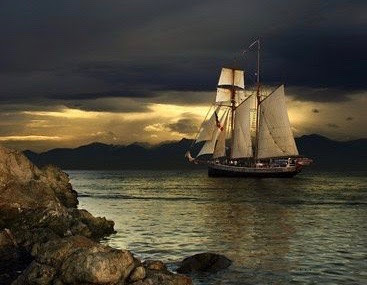 I love the sea and the ships that sail upon it. I also love a romance with a sea captain hero. So, in writing my Georgian and Regency romances, it was inevitable one or more would be set on a ship. So far, I have three seafaring romances: To Tame the Wind and Echo in the Wind, books 1 & 2 in the Donet trilogy of Georgian romances, and Wind Raven, the third in my Agents of the Crown trilogy.

When I began to do the research for these stories—that is, the part set on the ship—I had no idea what was involved.

Since I’m committed to making my stories historically authentic, I dove into all the ship terminology, pouring over my new 4-inch thick Sailor’s Word Book until late at night. But I realized just having the vocabulary was not enough. I wanted to be able to describe a storm at sea as huge waves crashed onto the deck and a battle that had shot from guns bringing down the sails around the characters.

For To Tame the Wind and Echo in the Wind I had to describe battles raging in the English Channel. For Wind Raven it would be a fight with pirates in the Caribbean. And I wanted to do it all while getting the ship terminology correct. So, I did hundreds of hours of research and studied diagrams of schooners and sail configurations until I was seeing them in my dreams. But even that was not enough.

I had to get the feel of the ship. I decided it was essential to take a ride on an actual schooner and that is just what I did.


The schooner pictured above, painted by artist William Lowe, is the Californian, a reproduction of a topsail schooner of the period that, fortunately for me, is berthed in San Diego where I live. It is the type of schooner Capt. Jean Nicholas Powell sails in Wind Raven and his father Capt. Simon Powell sails in To Tame the Wind.


This is the ship I experienced under sail. It was thrilling to hear the sails luffing, feel the wind on my face as the ship’s bow cut through the waves and the deck moving beneath my feet. (And, yes, it does move a lot.)

While on board, I soon exhausted the knowledge of the docent, at least as to the Georgian and Regency era ships. However, I found a jewel in the gunner, who became my technical consultant, and now my good friend. She led me through the things my research could not tell me. Even a simple question like whether the quarterdeck should be raised. You’d be surprised at how complicated the answer is. Some schooners were flush-decked, that is everything on the main deck is on one level, like the Wind Raven and the Fairwinds in my stories, so that you could walk from the bow to the stern without going up or down any ladders. The ship still has a “quarterdeck”; it’s just not raised.

If you compound this kind of issue many times over with everything from windows in the captain’s cabin (side windows existed in larger schooners), to what the captain might read (it’s in Wind Raven), to how a fast schooner can avoid the guns of a larger brig-sloop (it’s in To Tame the Wind) or how a brig-sloop outruns a Royal Navy frigate (it’s in Echo in the Wind), you begin to get a picture of the depth of research required to “get it right.” But the end result, I believe, is a story that puts you on the ship and gives you an exciting tale of love on the high seas. 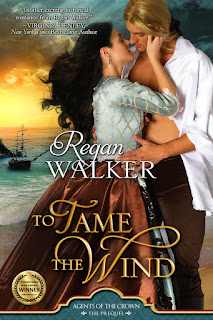 To Tame the Wind and Echo in the Wind are books 1 & 2 in the Donet trilogy.

Both Simon Powell and Jean Donet are respected sea captains who are not looking for love but that's before they meet two ladies.

“A sea adventure like no other, a riveting romance!” — Shirlee Busbee, NY Times Bestselling Author

In Wind Raven, set during the Regency period, a British privateer and an American hoyden clash on the high seas as they tangle with a notorious pirate, face a terrible storm and attempt to resist the rising tide of passion between them.


“A salty, sweeping, evocative tale of romance on the high seas—and a good old-fashioned love story that will keep you up far, far past your bedtime.”
— Danelle Harmon, New York Times Bestselling Author

One reviewer said,
“... it had me feeling the spray of the ocean in my face, my hair and clothing plastered to my body, the chill of my blood when you know, just know that you’re time is up and you’re done for.”

See all my stories on my Amazon Author Page.