Charlene Raddon’s THE SCENT OF ROSES – Western Romance with Mormons, Ghosts, Too Man Wives and a Man Falsely Accused 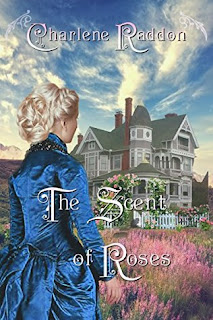 Set in the mining town of Whiskey Ridge, Arizona Territory in 1889, this is the story of Rosalyn Delaney, who comes to town in search of her husband, Josiah, who vanished six years ago. She tracks him to Rose House, an old mansion, only to discover that her missing husband has been killed, and his business partner, Whip Kincaid, is wanted for his murder.

Whip Kincaid had planned to make a fresh start in Whiskey Ridge and open a saloon with his friend Josiah. Now, he’s hiding in his own house, hoping to find the one responsible for his partner’s death. Rosalyn’s presence interferes with his plans, but he’s having fun pretending to haunt the house using its secret passages.

Meanwhile, Rosalyn must contend with Josiah’s second wife, about whom she knew nothing until she arrived, and the woman’s brother who was a bit of too much.

The story opens with an exciting scene of a mine collapse, well described, and goes on from there to develop a cast of engaging characters, each driven by their own needs and deeds they want to keep hidden. I quite liked the very formal butler who was always there to keep everyone in order. Because the heroine comes from a Mormon family, the Mormons are discussed at some length. Raddon does an excellent job with Whip’s young daughter, an endearing character.

Midway through the book, Tempest from To Have and To Hold shows up with family in tow, to help solve some mysteries, so I do recommend reading that one first.

An enjoyable Western romance.
Posted by Regan Walker at 2:00 AM