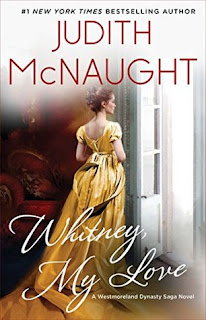 I'm finishing the month with a classic Regency, Judith McNaught's first novel, which she wasn't able to sell it until she had two others published.

I have read and reviewed all her other romances and I remain a dedicated fan. She is a brilliant writer. I love her ability to create and maintain sexual tension and weave a wonderful story. But she often makes the hero out to be such a mean cad that it is difficult to like him...ever. In Whitney My Love, I thought it would be different, but I was wrong.

Whitney is a young, spirited intelligent girl of the country gentry who is sent by her hard, unloving father to Paris to live with her aunt and uncle who love her. There she thrives and becomes an ingénue who is embraced by Paris society. She has many suitors, among them a Frenchman, Nicholas Du'Ville (Nicki) who is really the one you want her to love. (Not atypical for McNaught, there is a good guy who loses to the cad in the end.)

Meanwhile, Clayton Westmoreland, the Duke of Claymore, becomes enamored with her for her spunk and beauty, and though he has his choice of women both in France and England, he wants her. He doesn't want to compete with her suitors, however, so he does research and finds her father is deeply in debt. He decides to essentially buy her from her father, who quickly recalls her to England without telling her she is betrothed to Westmoreland. Westmoreland goes to the countryside where she lives and buys a small home there and assumes a disguise as an ordinary man, ostensibly to court her without having her impressed by his title.

Here's where the character of the hero is a bit inconsistent. For most of the book, he is patient, humorous and tender. Whitney does not want him, however, preferring her childhood love, Paul, who, frankly, is rather bland. Westmoreland takes all this in stride and woos her rather well, actually. She's even starting to realize how much she's attracted to him. But then she discovers Westmoreland is her betrothed and she rebels at his deception. Just as she realizes Paul is not a good choice for her and begins to see that Westmoreland is the right man, one of Whitney's enemies, a catty female who is jealous of her, tells Westmoreland that she has slept with others (untrue).

Does he ask Whitney about this? No. In a fit of rage, Westmorland violently rapes her, realizing in the midst of it she is a virgin. At this point, I didn't see how Whitney could ever get over that. I really don't think a real woman ever would. Westmoreland regrets the rape and realizes he loves her but does he do the honorable thing and marry her? Beg for her forgiveness? No, he drops her like a hot rock. See what I mean about his being a cad?

Meanwhile, she is despondent and our spirited Whitney turns into a mush ball. She finally gets him back by humbling herself before him in front of his new fiancé. But then he does another weird mean cad switch when he misreads a note and believes she's taken a lover (when did she find the time?) and believes the baby she carries may not even be his. At this point I felt whipsawed.

It's typical early McNaught...great story, great writing, but a hero who overreacts and abuses the heroine, in this case more than once. But I could not put it down. So it goes on the Best List.
Posted by Regan Walker at 1:00 AM