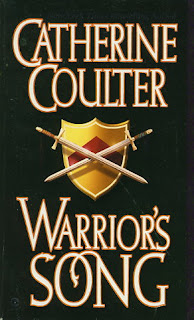 October is Medieval month and I’m starting with a wonderful story with a magnificent heroine by one of my favorite authors!

Set in 1272 in England and the Middle East, this is the story of Chandra, who was raised by her father to be a warrior, to fight like a man and to enjoy the company of men. She loathes the traditional role of women that confines them to being a broodmare under a man’s domination. She loves her father and her home, Croyland Castle, on the Welsh border and never wants to leave. But her father has other plans. He has found a man who respects Chandra, Jerval de Vernon, who has even saved her from a bad guy (the hero in FIRE SONG) and has decreed she will marry Jerval whether she likes it or not. Chandra thinks of Jerval as a friend, a playmate, but when she marries him, he turns into a domineering man just like all the others.

This is a wonderful fast-paced story that takes you from the Welsh marches of England to Cumbria on the border of Scotland and then to the Mediterranean and the Holy Land on crusade with King Edward. During many adventures, Chandra and Jerval blend their different personalities and to find love in the midst of many challenges. Chandra is a heroine to die for: brave, unique, independent and willing to fight for her right to use her gifts. She takes a bad beginning with a mother who doesn’t love her and uses it to build strength. I loved this woman. Jerval instantly finds himself lusting after her but doesn’t realize that when they are married she will still be the warrior woman she is when they meet. Like many husbands, he thinks to change her. But they both change.

Coulter did a great job on the research of the times and gives us a feeling for both 13th century England and the 9th and last Holy Land Crusade. Her dialog is excellent, her characters rich and the plot is believable (though I admit Chandra’s skills are a bit over the top). I really enjoyed this one and think you will, too.