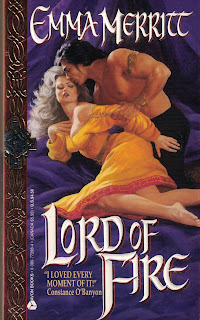 Emma Merritt wrote some wonderful historical romances. This is one of the few set in the Highlands. It’s the year 625 when Norsemen, Picts and Gaels vied for control of Scotland.

It tells the story of a half-Pict chieftain, Malcolm mac Duncan, whose heart's desire is to unite all of the Highlands. To make peace with the Southerlanders living at the top of Scotland, Malcolm took a bride. But that wife committed suicide, so he wants another from the Southerlanders. And the one he wants--the one he claims--is a beautiful young woman named Jarvia who is educated in the Gaelic tongue and is now the Law Speaker for her people. Malcolm wants an heir; Jarvia wants to save the girl they would have given to Malcolm, so she agrees to wed him.

There's treachery from many camps here and lots of action to keep you reading. Duncan proves a worthy hero and Jarvia his perfect mate. At the end, Merritt leaves some threads loose to come back to in the second book, Lord of Thunder, the story of Norseman Michael Langssonn, Malcolm’s long lost twin. If you are a fan of Merritt, and I am, I think you'll enjoy it.
Posted by Regan Walker at 2:00 AM