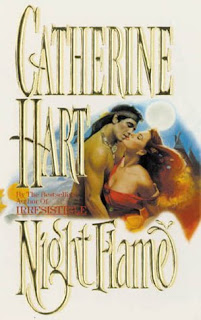 Set in the mid 19th century in Wyoming, this is the story of Sarah Wise, the spoiled Southern belle daughter of General Wise, who indulged his only child. So when she asked to go into the West with him and his men, he finally agreed. And so begins the tale of Sarah’s new life.

As they move deeper into the frontier, Sarah begins to change, as she must accept hardships of the road. She dare not complain, as it was she who insisted on coming along.

At Fort Laramie, the young Cheyenne chief Night Hawk sees Sarah and knows instantly the redhead he calls “Flame” is his soul mate. Sarah recognizes him from a dream she has had, one of many dreams that tell of future events, and is frightened. Little does she know that she is about to become his captive.

Hart kept me on the edge of my seat reading all that happens to Sarah and the Cheyenne over the next few years. There are many twists and turns as Sarah makes a new life among the Cheyenne, tries to escape, discovers her gift of dreams makes her a “Dreamer” to the Cheyenne and greatly prized. She grows up and falls in love with her respected Cheyenne warrior husband. And Night Hawk never flags in his love for her, save for when she tries to escape and he believes she has betrayed him.

Hart’s deep research into the Cheyenne people comes through as we experience all that it means to live among them. She brings the era to life and adventure to the page. And she has given us some splendid characters. I highly recommend this story!
Posted by Regan Walker at 11:14 AM