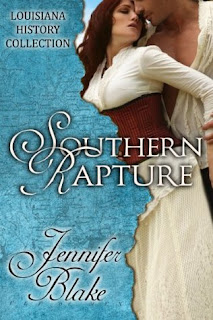 Lettie Mason, a Boston schoolteacher, lost her brother to an outlaw’s bullet in a small Louisiana town during the Civil War. As a result, when the war is over, she travels to that same town to learn about her brother’s death. She believes he was killed by an outlaw known as the “Thorn”. She has heard tales of his many good deeds as well as the bad. And when she encounters him in the dark, he kisses her and then, later, makes love to her. She does not resist.

Meanwhile, she has begun to teach two young men at Splendora, the estate where she is staying. One, the very handsome Ransom Tharp, who returned from the war with a head injury that left him “not quite right”. Or is he?

A local hero carries on with two personalities to help his people…a disguise that keeps him from the woman he would have. But Lettie suspects all is not as it seems.

A great story, well told by a master of historical romance. It’s part of the boxed set, “The Best of Jennifer Blake. Highly recommended.
Posted by Regan Walker at 7:39 PM