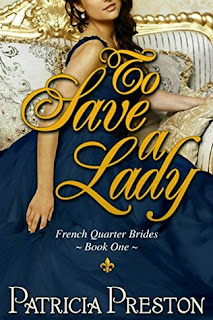 Set in 1814 in New Orleans, this is the story of Elisa Plaisance, a lady’s maid, who becomes a messenger for the Americans, feeding information to Capt. Jesse Cross, an aid to General Jackson. She does this as a part of a bargain she made with a man named Louis Beauvais, who agrees to search for her mistress’ missing son. Her mistress, having lost her husband and her other children is pining away for her son.

Elise’s one desire is to avoid her mother’s fate, ending up as the neglected mistress of a married man. Yet she falls in love with Jesse and is the one to suggest they make love—without benefit of marriage. Jesse seems to have only honorable intentions but it takes him a while to get around to that. And then there is the war…

Preston brings to life the time at the end of the War of 1812 when, unaware that a peace treaty had been reached, the Americans and British in New Orleans fought on. She obviously did much research to get the events correct. Her fight scenes are exciting and the fictional intrigue believable. Elise is a sympathetic figure though at times she does seem a bit confused about her goals. Still, she is unselfish and wants only the best for her mistress, who saved her from a fate worse than death. Jesse is honorable in all things and his cousin is a worthy character (who will be a hero in an upcoming book).

It’s a great start to her French Quarter Brides series and I recommend it.
Posted by Regan Walker at 2:00 AM