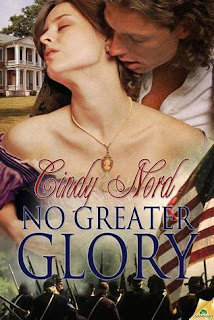 A well-researched debut novel with considerable detail of the various battles around Virginia, this is a romance for those who like to savor the details and want to dive deeply into the Civil War.

Set from 1862 to 1865, it tells the story of Emaline McDaniels, a widow trying to hold onto her Virginia plantation, Shapinsay. Then Colonel Reece Cutteridge, a Union officer, shows up to requisition her home and her livestock to winter and feed his troops. Despite her disdain for the Union, Emaline finds herself assisting the Union doctor and nursing the colonel’s men, all the while fighting an attraction to their commander.

Reece has lost his wife and child and resists Emaline, but quickly finds himself falling in love with her. Separated by war, they will find themselves brought together by fate.

Nord describes what it was like to hold a plantation on the edge of war with intruding soldiers, deserters and miscreants all trying to steal what is not theirs. And in the midst of all that, a love blossoms between two people on opposite sides.

Some parts of the book will seem more like historical fiction than romance, the love story taking a back seat to the war, but romance readers who like real history dished up with the love story will love it!
Posted by Regan Walker at 6:19 AM