Betina Krahn’s THE BOOK OF THE SEVEN DELIGHTS – Adventure and Love in Morocco! 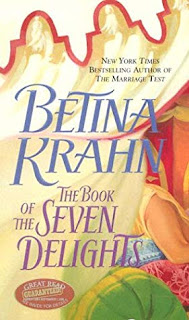 Want to take a trip to Morocco searching for the remnants of the Library of Alexandria? Want to do it with a sexy, funny hero with a name like Apollo Smith? Then this is the romance for you!

Betina Krahn has become a favorite of mine. This book is the first in her Library of Alexandria duology. (The Book of True Desires is the second.)

In this first one, set in the late 19th century, we meet librarian Abigail Merchant (“Educated, opinionated, respectable, headstrong and too caught up in her high-minded pursuits to recognize, much less respond to the lust she inspired”), who is traveling to Marrakech to find what she believes will be some lost volumes from the famed Library of Alexandria. On her way, she encounters Apollo Smith, who due to treachery, was forced to serve 5 years in the French Foreign Legion and, having escaped, has returned for some mysterious “family matter.” He agrees to help Abigail reach her goal for half the prize she uncovers.

Krahn does a superb job of bringing the Moroccan desert to life, the Berber tribes, the Legionnaires, and the hazards of travel at the end of the 19th century in such parts of the world. Very cleverly she helps us experience the mind of a librarian, who catalogs everything she thinks of under various numbered library categories.

Then there is Apollo. Had to love the guy who described Abigail as a woman “who had a way of finding every sensitive nerve in his body and every sore subject on his mind.”

Great writing and a great story. A worthy romp.
Posted by Regan Walker at 5:56 AM