Candice Proctor’s BEYOND SUNRISE – Victorian Adventure and Love in Polynesia from a master of Historical Romance! 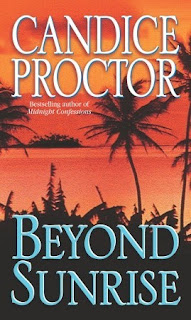 Set in 1868 in the South Pacific, this tells the story of India McKnight, a tall Scottish spinster and travel writer who arrives in the Polynesian islands determined to find passage to the island of Takaku for her research. But the only person who will take her to the cannibal-infested island is Jack Ryder, an Australian being pursued by the British navy, ostensibly for causing the death of most of a ship's crew 10 years before. In the course of his reluctantly helping India reach her goal, he holds her captive in the jungle to save himself from the pursuing British navy.

Two people from very different walks of life, thrust together in intimate circumstances can get to know each other very well. Such is this story: a woman who carved out an independent life trying to avoid society’s expectations for her, and a man who, in some ways, had thrown his life away, must find a way to communicate as they are pursued by cannibals and the British navy, including a man Jack once called his friend.

As always, Proctor slowly and wonderfully builds the layers of her characters and the challenges they faced in the past and the ones confronting them now. Often stripped of their clothes due to cold, heat or misadventures, they are also stripped of the veneer that both wear, until they see that what lies between them is too unique to ignore, or cast away. The setting is exotic and beautiful and there is adventure on the sea as well.

Another great from Candice Proctor…I recommend it!
Posted by Regan Walker at 9:16 AM