Iris Johansen’s THE GOLDEN BARBARIAN – Desert Sands Make for an Exotic Locale in this Keeper! 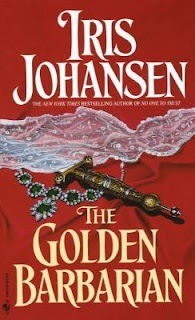 This is the first in the Sedikhan series and it's a good one. If you like strong, resourceful heroines, handsome desert Sheikhs and love stories set in exotic places, you'll love this one. As with all Johansen's historical romances, she takes pains to weave a complex tale with wonderful characters and believable sexual tension.

Set in the early 19th century, this is the story of Tess Rubinoff, Princess of Tamrovia (somewhere in the Balkans) who first meets Galen Ben Raschid Sheikh of Zalandan (think desert sands) when she is 12 and he pulls her and her dog out of quicksand. Even then, he has designs on her as he wants to link their two countries in order to gain sufficient power to unify the desert tribes of Sedikhan.

Since she is only 12 when they meet, he will wait; he is a patient man. She spends the next 6 years in a convent at her cousin's suggestion (prompted by Galen) to protect her from an abusive father. When her father rejects Galen's suit, Galen arranges to steal Tess away by making her a proposition she cannot refuse—and she doesn't.

Once in Sedikhan, the adventure begins.

In case you want to read more of them, here is the entire Sedikhan Series (not all are historical; some are contemporary; but all have a link to Sedikhan):

The Golden Barbarian
The Golden Valkyrie
The Trustworthy Redhead
Capture the Rainbow
Touch the Horizon
A Summer Smile
And the Desert Blooms
Always
Everlasting
Till the End of Time
The Last Bridge Home
Across the River of Yesterday
Star Light, Star Bright
Man From Half Moon Bay
Blue Blue Skies and Shining Promises
Magnificent Folly
Notorious
A Tough Man to Tame
Posted by Regan Walker at 3:00 AM