Victoria Holt’s ON THE NIGHT OF THE SEVENTH MOON – Love and Mystery in the Black Forest! 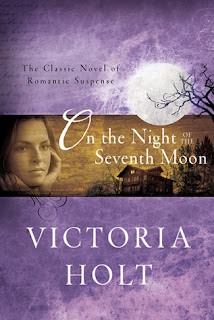 Set in Germany and England from 1859 to 1870 (with an end note in 1901), this tells the story of Helena Trant whose parents were so much in love they had little time for her. Still, hers was a happy childhood among books in Oxford where her father had a bookstore. When she was old enough, her parents sent her to Germany near the Black Forest to a convent school where her mother had been educated.

Helena loves the forest and the fairy tales surrounding it. She hears of the legend of the night of the seventh moon “when mischief is abroad and is routed with the coming of dawn.” On one night, she gets lost in the mist of the forest and is rescued by a man who takes her to his hunting lodge. She taken with him that she might have allowed him to have his way with her but for the intervention of a housekeeper who took measures to preserve Helena’s virtue. But Helena never forgot the man even though she did not know his name.

Years later, she returns to Germany and on another night of the seventh moon Helena meets and marries her German at his hunting lodge, but then she wakes from her idyllic honeymoon to discover she has been drugged by a physician who tells her she has escaped a horror that befell her in the forest. Helena lives in a fog of dreams and wonders where truth is.

I have to say that I love Holt’s writing, and this story sucked me in immediately. It is labeled as a romantic suspense, but I didn’t see it containing any more suspense than many historical romances. But it does have a Gothic feel and there is a mystery. Holt had me wondering what had really happened. She did an excellent job of that. The book is a bit slow in the middle, and the hero and heroine are separated for years. In that interim, I found passages that seemed repetitive, but the ending is a great one. As always, Holt is a master storyteller and creates wonderfully vivid characters. I recommend it.
Posted by Regan Walker at 1:00 AM