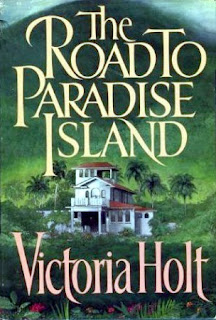 Annalice Mallory, the sheltered daughter of a family of Victorian mapmakers, discovers a hundred-year-old diary of her long-dead ancestor that includes a map of a mysterious far-off island that supposedly is home to an idyllic civilization and where gold is in abundance. Philip, Annalice's brother, is intrigued by the idea and sets sail for the island. But when two years pass and he doesn't return, Annalice sets out to find him in a journey that leads her through exciting outposts including Australia and the tropical islands of the South Seas, where she encounters heart-stopping peril and the promise of love.

The first part of the story tells of Annalice’s ancestor who was believed to have been murdered by a sinister man who wanted her inheritance and was willing to kill for it. But along with the story comes a well-drawn map of a mysterious island. Annalice feels drawn to her ancestor and wrapped up in the mystery of the island. So, she leaves behind her unofficial fiancé to sail to the South Seas in search of her brother and the island. In the process, she encounters Milton, who owns a plantation on an island he controls. Milton cares nothing about Annalice’s fiancé as he wants her for his own.

The characters are interesting and richly drawn, the story intriguing and, as with all of Victoria Holt’s books, there is a mystery. It’s in the first person and we are only in Annalice’s head but that didn’t bother me. I was lost in the adventure of it all.

I do recommend this to all Holt fans, of which I am one.
Posted by Regan Walker at 1:00 AM