Georgette Heyer’s FARO’S DAUGHTER – A heroine outwits a hero determined to bring her down. A wonderful Heyer! 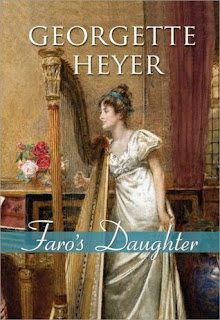 Deborah Grantham is no ordinary woman living in the Regency period; she’s a key person in her aunt’s fashionable gambling establishment. Gentlemen come to engage with the beautiful young woman, but Deb is a wily one. She wants none of them. When young Lord Mablethorpe, three years her junior, asks her to marry him, she appears to entertain the possibility but, actually, she has no intention to become the pup’s wife. However, his uncle, the wealthy rake, Max Ravenscar, doesn’t know that and offers her a fortune to refuse the marriage proposal. She is highly offended that he would try and bribe her and decides to convince him she will marry Lord Mablethorpe.

Thereafter, Ravenscar and Deb go to battle, each outdoing the other. Max calls her every derogatory term he can think of all the while he is gaining respect for her spirit. At one point she even holds him hostage for buying up her aunt’s debts. Ha!

I loved this story, which is so different than many of Heyer’s wonderful Regencies. A very worthy hero and heroine outwit each other time after time. Lots of action, well described and a sweet ending.
Posted by Regan Walker at 1:00 AM