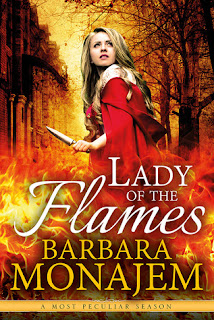 Set in London in 1811, this is the story of Lord Fenimore Trent (“Fen” to his friends) who has been born with magic from the Fair Folk, to include his friendship with knives and tools (hence, against his noble father’s wishes, he goes into “trade” to become a carpenter along with a host of magical and not so magical characters—all delightful.

The love of Fens’ life is Miss Andromeda Gibbons, who he gave up years ago when he was told she had bedded his friend, Donald. But Fen was wrong. Now, he and Andromeda will be thrown together to fight a ruthless French spy and the English traitor working with him. Since her magical mother died, Andromeda has denied the magic, but she is soon to discover her gift for magic.

The addition of magic and magical creatures such as hobgoblins to a Regency story adds a certain something and Monajem does it very well. I loved Fen and Andromeda. The dialog is witty and served up at a fast pace. There are just enough historical references and details to make it authentically historical.

Witty, wonderful and magical! A fresh voice you will love!
Posted by Regan Walker at 1:00 AM