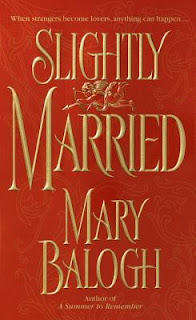 This is the story of Aidan Bedwyn, a colonel in the British Calvary, and the brother of the Duke of Bewcastle, who makes a promise to a dying soldier who saved his life to look after the soldier’s sister. Upon his return to England, he travels to Ringwood Manor in Oxfordshire only to discover a strange provision in the will of the dead soldier’s father that the sister must marry—within days—to save her home.

Eve, a coal miner’s daughter, has been waiting for her brother, Percy, and her beau, John, the son of an earl, to return. John promised to marry her but he is nowhere in sight and she has heard nothing from him. So when Aidan offers her a marriage of convenience, she accepts to keep the family estate from falling into the hands of her sniveling cousin (who reminded me of Mr. Collins from Pride and Prejudice) and to save a bevy of women and children (and others) she cares for from the streets.

The arrangement that brought about the need for Eve to marry was cleverly done. Eve plays host to a wonderful cast of secondary characters. I liked Eve well enough; she was practically a saint. But Aiden came off a bit of a crusty old guy (even though he was young). It was difficult to imagine the two together. Only at the end did they seem to find a genuine affection for each other. The book is a great set up for the series as it introduces you to the Bedwyn siblings.