Kathleen Woodiwiss’ A ROSE IN WINTER – A Choice Between Love and Honor in a Great Georgian Romance! 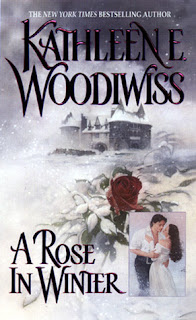 Kathleen Woodiwiss has written some truly great romances. She was a great storyteller. This one at well over 500 pages is no exception. A rose in winter...a flower blooming out of time...a sign of true love to come. Ah yes...how we love it.

Set in late 18th century England, this is the story of the Sexton noble family, whose lord and his eldest son were killed for their wealth and lands. Now the young lord, who succeeded his father, has supposedly died in a fire purposely set to end his life, the same fire that burned a wing of their mansion.

Years later, a wealthy Yankee merchant seaman, Christopher Seton, has come to the village of Mawbry seeking a place to live while he settles a debt owed him. He makes inquiries about the old Saxton Hall, still vacant after the death of the young lord.

Living in the same village is Erienne, a beauty whose only value to her father (the Mayor) is to be sold to the highest bidder among her many suitors. Her father needs the money to pay his debts, including the one he owes to Seton, who has taken a fancy to Erienne.

At the sale, the highest bidder is an agent for a mysterious "Lord Saxton," supposedly the very same lord who was thought burned in the fire. He wears a mask to hide his deformed face and walks with a deep limp. Now wed to the man, Erienne initially fears him, but he is kind and generous to her. She holds him at bay as to their physical relationship. Slowly, she comes to respect and care for him, but alongside this growing feeling for her husband is a growing attraction to the Yankee Seton.

Woodiwiss deals us a fast moving hand as the players hide their true motives and their true characters from each other. As we follow along, we are not disappointed. Like her other romances, she weaves a complex tale and provides a rich tapestry of characters. Her descriptions will put you in the scene and leave you wanting more.

If you're a Woodiwiss fan, you'll love this one.
Posted by Regan Walker at 1:00 AM