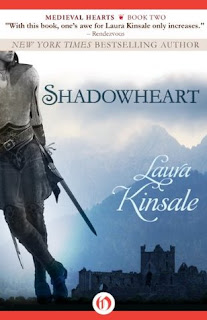 To say this book was difficult to review is an understatement. Let me say at the outset that Kinsale writes brilliantly and has obviously done an amazing job of presenting the historical setting of 14th century Northern Italy. The story held my interest; however, it is also sometimes disturbing and, in places, had me figuratively tearing out my hair. Some historical romance readers will have difficulty with parts of it.

This is the sequel to For My Lady’s Heart and much of our introduction to the hero, Allegreto, can be found there, should you want to read it. Shadowheart won the RITA in 2005 for Best Historical Romance, which is interesting in itself, as you’ll see from my comments below. Unlike the prequel, this one is only sprinkled with Middle English, and much better for the change—we can actually understand what Kinsale is saying.

Set in the late 14th-century, Allegreto, the 16-year-old assassin we met in book one, and bastard son of the Italian Navona family, now in his late 20’s, has one goal—to reclaim his birthright in Monteverde (Northern Italy). He is strong, mysterious and ruthless. To secure his claim, he uses treachery to capture the last heir and princess of Monteverde, 17-year-old Elena. Much happened after her capture that bothered me. I apologize for some spoilers, but I can’t review this book without them.

Allegreto (called “Il Corvo” after his island and “pirate” to Elena), rapes her and then calls her “wife,” though there is no marriage nor vows of any kind. How he intended to claim her lands with no lawful marriage mystified me but that’s how the story begins. That Elena, who seemed a bright, independent young woman, could be so witless as to walk into his trap and believe that he had married her and consummated the marriage while she was drugged was just bizarre. She never challenges it, though with her personality, one would have expected her to.

As to Elena and Allegreto’s sexual relationship, I just have to say it was strange for a 17-year-old innocent. While I don’t typically quote other reviewers, the following assessment so closely paralleled my own views I thought to use it: “Had she written a bigger buildup of Elena’s obsession with her “angel” of the past so there was a foundation for the present relationship, then made Elena a reluctant apprentice in the S&M and bondage in an effort to “save” Allegreto's black heart and soul, the scenes could have been made darkly beautiful and believable. As it was, we had to make some lightning-fast adjustments to keep up with the young girl we were first introduced to who was alarmed by the aggressive kisses of a romantic knight, and within a matter of weeks morphed into a disturbing and disturbed seductress. We were given no reference point from which to understand the flowering of the relationship between Elena and Allegreto, other than the point at which they came together to draw blood. As a result, we have a very hard time envisioning a happily-ever-anything for these two.” I, too, found it unbelievable. One could expect Allegreto to engage in such behavior given his background, but Elena? Raised as an educated young woman in a happy home in England, it was hard to believe.

Almost all the story is in Elena’s point of view so we know little about Allegreto’s thoughts. We do know (early on) that on his island kingdom he pursued the occult and was creating a generation of young assassins in his own image. Elena, finding that disturbing, as well she should, is naïve enough to believe if he promises not to train her own children (when they come) in his murderous ways, those children will somehow be different from their father or the assassin culture all around them. That made her look witless.

The change in the hero and heroine over the course of the book was interesting: she started out weak and became a dominating princess and he started out strong and ended up her love slave.

I wouldn’t recommend this book without the disclaimers in this review. But for those who don’t mind all that, I could say it deserves 4 stars simply for the achievement it represents.
Posted by Regan Walker at 1:00 AM