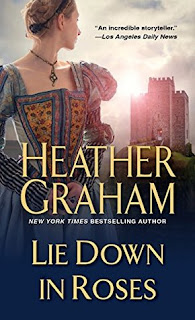 This one is hard to put down and very well written, but with some disturbing elements. Set in the 15th century England during the time of the War of the Roses (when Richard III and Henry Tudor compete for the throne), this is the story of Lady Genevieve whose family seat is Edenby Castle, a lovely place on the English coast.

When Lord Tristan, nobleman and knight loyal to Henry Tudor, asks for her father to feed his knights and is denied based on the family's loyalty to Richard III, the anger of Henry Tudor rises. He tells Tristan to take the castle and do whatever he wants with Genevieve. In the process, her father, many of his men and her much loved fiancé are killed and she is left the "lord of the castle" to negotiate with Tristan.

Following a plan conceived by others, she lures Tristan and his men into a trap that backfires. Tristan is bitter with what he perceives as her treachery, but wants the lady for his pleasure so he takes her. Thereafter, he treats her abysmally, locking her away in various rooms of the castle. Throughout this, Tristan undertakes battles for King Henry, all successful, and grows in stature, power and wealth within the English court.

You really feel for Genevieve, however, the beautiful, proud and courageous young woman who is forced to become his prisoner and his whore to her great shame without much of a life except for the nights he chooses to spend with her. And, yes, they do share a passion but it's hard to see how that can make up for being treated so badly. And how can he blame her when she repeatedly tries to escape? What woman wouldn't?

He has no interest in marrying her even when she becomes pregnant with his bastard child. But at least King Henry likes her and has a major role in the happy ending. I did find her folding to him at the end a bit difficult to believe. Not sure that would ever happen. Ah, but this is romance, right?
Posted by Regan Walker at 1:00 AM