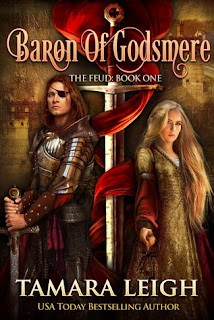 Set in 14th century England, this is the story of a feud between three noblemen, each elevated to a baron and given a portion of his former lord’s lands. Jealousy and reprisals pit family against family, passing the feud from father to son. In an attempt to end the feud, King Edward decrees they shall intermarry and provides Baron Boursier a deadline, after which he will forfeit his lands.

Bayard Boursier is given a choice between two daughters of his enemies. On the eve of the deadline to honor the king’s decree, the fair Elianor of Emberly takes matters into her own hands. Determined none will suffer marriage to the man who she believes to be a beast, she carries out a plan to imprison him long enough to ensure his barony is forfeited. But when all goes awry and her wrathful enemy compels her to wed him to save his lands, she discovers he is not the terrible man she thought him to be. The real enemy is one who lurks in their mids, one Agatha, is determined to keep the feud burning.

Leigh does a great job of slowly developing the romance between Bayard and Elianor. He is tender with her and she can hardly fail to respond when she was the victim of a brutal man in her first marriage. Leigh has also captured a feel for the era and the historical setting. That said, the story moves along at a slow pace in places and it seems repetitive but one can just follow the dialog, which is very good and full of emotion. The dramatic ending is exciting and made me want to read the next in the series.

Baron of Godsmere
Baron of Emberly
Baron of Blackwood
Posted by Regan Walker at 1:00 AM