Megan Bryce’s TO WED THE WIDOW – Early Victorian with a Seductive Widow and an Earl’s heir, both want a child and marriage but just not to each other 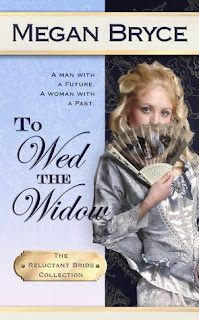 Megan Bryce is a new author for me but, after this one, I'll be reading more of her books.

George Sinclair loved India but when his brother’s wife gave birth to a fourth daughter, Sebastian, the earl, demanded his brother return to England as his heir. And he wanted George to marry. Any respectable woman would do, but not “The Widow”, Elinor, Lady Haywood. She’s been widowed five times and with no children to show for it. She is a distraction George very much wants in his bed, but what he needs is a wife from a good family. What Lady Haywood wants is a child and her next husband.

The story is well told with rich emotion and some great characters, even a villain in Elinor’s brother. No real history here except the references to India and trade, which George was once engaged in. But it’s a delightful story of the tug of war between George and his staid brother, the earl, that will draw you in. And there is a side story of the earl and his wife, who befriends Elinor. I recommend it.
Posted by Regan Walker at 5:48 AM